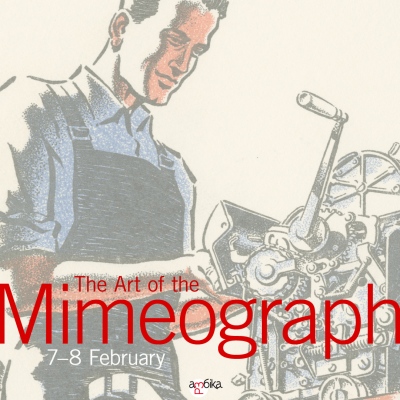 The Art of the Mimeograph:
International Conference at the University of Westminster
Convened by Alt Går Bra

The art group Alt Går Bra presented an international conference exploring the political and artistic role of the mimeograph.

Mimeographs are the stuff of legends for anyone studying alternative and underground publications. Mimeograph machines democratised the printing and publishing medium, enabling a host of political and artistic groups to disseminate ideas outside of the mainstream printing presses, and establishing international artistic and political networks.

With the aim of encouraging a new perspective on mimeo publications, the conference brought together historians of art and visual culture from the UK, USA, Italy and Japan to discuss the impact of the mimeograph in the 20th century and what it can teach us today.


The conference coincided with Alt Går Bra’s exhibition The Art of the Gestetner at Bruce Castle Museum, featuring over 150 mimeo’d publications, newspapers and other documents, alongside mimeographed works by Alt Går Bra.

For more information about the exhibition visit: https://goo.gl/UMNnzc

Alt Går Bra is an art and research group exploring the intersections between art and politics through exhibitions and publications. www.altgarbra.org 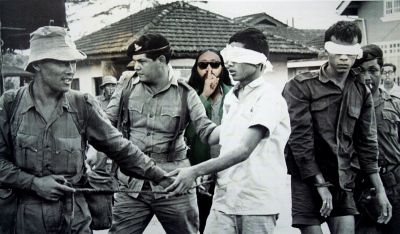 The Kodak carousel slide projector has continued to be used by contemporary artists around the world for the past 15 years, despite no longer being produced since 2004. Now considered obsolete, the slide projector has come to evoke the past. The story of media history is often defined by the advent of technology, so the continued artistic use of an apparatus long after its industrial demise challenges this story. In the age of swipe and scroll, the ‘forgotten’ medium in the history of media technology gives us a moment to reconsider what we have lost and gained in the digital evolution.

This exhibition showcased eleven installations made by international artists after 2004, celebrating not only the heritage of the medium but also its extension into the contemporary context. Blackout, the title of the exhibition, refers to a distinctive characteristic of the slide projector: the intermittent moments of darkness between the projected slides. Unlike analogue film projection, which operates similarly, the slide projection’s low frame rate makes the oscillation between light and darkness visible to the human eye and distinctly felt. The title also references historical amnesia and collectively suppressed memories that many of the artworks call for us to remember.

This exhibition was curated by Julian Ross, CREAM Research Fellow, and is based on the research he conducted for his Leverhulme Early Career Fellowship at CREAM, University of Westminster. The exhibition was first presented at Kunsthal Rotterdam during International Film Festival Rotterdam, 24 January - 3 February, and will travel to Greylight Projects, Brussels, in April 2019.

Between a Gaze and a Gesture, 2017, Hannah Dawn Henderson

The private view involved an introduction by Julian Ross and an artist tour with several of the participating artists, led by Jelena Stojkovic (Arts University Bournemouth). 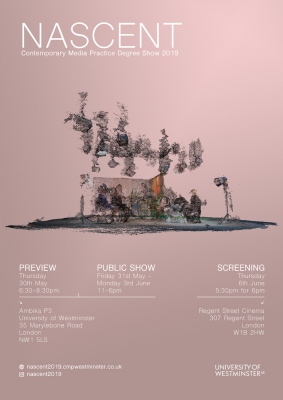 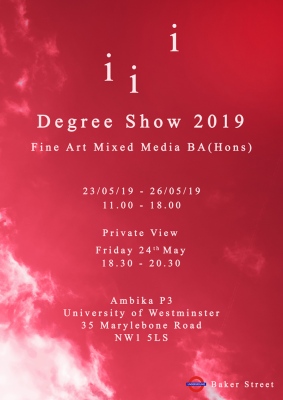 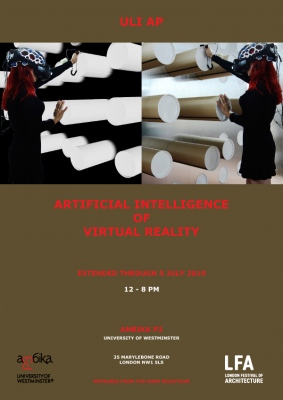 At the time of AI, we are all concerned about them – some are worried, some are scared, some keep themselves optimistic and look forward to it, some are bored with them, some are not interested, some can't hear about them anymore, some prefer not to say. The one thing that unites us all – we all know they are coming. We feel them. We hear them. But we do, actually, not know who they really are.

This site-specific intervention to the extraordinary underground concrete hangar of Ambika P3 is a prototype of Anti-Gravity Reality: Inside the Black Cube or Brain AI, a project that reinvents human relationships with a machine and takes a philosophy of labour as a port of departure – to construct art without artists and architecture without architects. By donating their emotions to a machine, audiences become performers experiencing situations of their own making and creating structures to become a part of an outside installation.

Dancing on the mezzanine in a cross-reality zone of virtual, physical, and mental spaces – Anti-Gravity Reality: Inside the Black Cube or Brain AI looks freely towards vast open spaces of an unfolding concrete chamber mimicking its appearance through inclusion of windows in its structure. While windows observe the slow movement of the tubes and turned into a performer participant who is, immersed in VR, unaware of this surveillance mechanism.

It is a unique Virtual Reality experience – one of its kind you have never experienced before.

Animating a brutalist structure of Ambika P3, the machine establishes a dialogue between built and artificial environment, performance of a human and performance of a machine in an interactive conversations traversing borders of the disciplines and mediums. 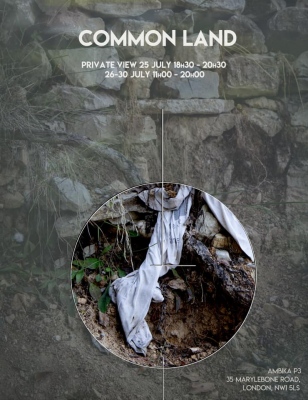 Showcasing the work of a collective of independent photographers, this group exhibition is a multicultural space where a range of experiences and ideas are presented through the medium of photography, united around the theme of Common Land.

This is the first exhibition to be held by Common Land Collective, a group of MA Documentary Photography and Photojournalism graduates comprised of Francesca Gabbiadini, Denise Goldman, José Manuel López Goicoechea & Chiara Mac Call who have continued to work together to present new and on-going projects. 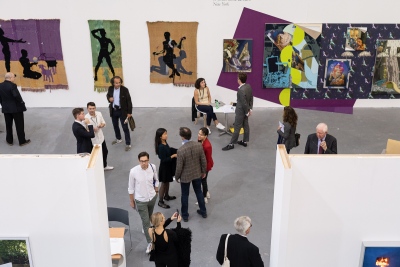 Sunday is an annual contemporary art fair held in London which focuses on new and emerging artists and galleries from around the world. This year Sunday will showcase 30 international galleries exhibiting solo projects or curated group presentations. 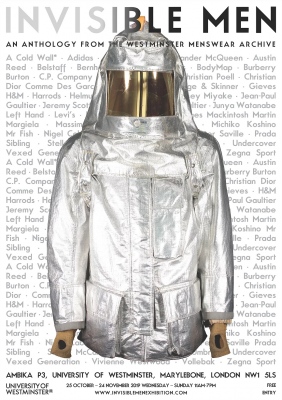 AN ANTHOLOGY FROM THE WESTMINSTER MENSWEAR ARCHIVE

Drawing exclusively from the Westminster Menswear Archive, Invisible Men covers the last 120 years of predominately British menswear through the display of over 170 garments, the majority of which have never been seen on public display.

This four-week exhibition is arranged into twelve sections, presenting designer garments alongside military, functional, and utilitarian outfits. It explores the design language of menswear, which predominately focuses on the replication of repeats archetypal functional garments intended for specific industrial, technical or military use.

Invisible Men will illustrate how designers have disrupted these conventions through minimal, yet significant modifications to produce outcomes that both replicate and subvert their source material. Through this approach, the language of menswear has developed an almost fetishistic appreciation of the working man in all his heroic iterations, referencing the clothing of seafarers, soldiers, athletes, firefighters, road workers, and explorers.

The endless replication, appropriation and interpretation within menswear has meant that the meaning and function of the original archetypes has faded through each reiteration.

This design strategy has, for the most part, allowed men and what they wear to avoid scrutiny: these garments have remained invisible within fashion exhibitions in favour of presenting menswear largely as the story of the dandy or the peacock male.

This exhibition aims to shine a light on these invisible men. 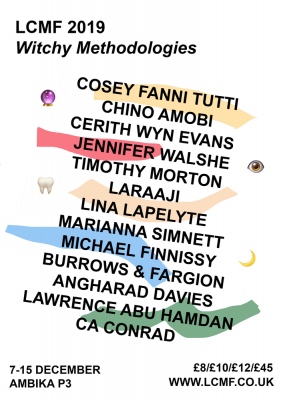 ‘the capital’s most adventurous and ambitious festival of new music’ (The Guardian), is back for its eighth edition in seven years.

Teaming up with the Serpentine Galleries, experimental choir collective Musarc, Australian curatorial force Liquid Architecture and cult new imprint Ignota Books, and returning to the epic, subterranean Ambika P3, LCMF 2019 is back with its most ambitious programme yet, exploring the witchy turn in art, poetry and music.

LCMF 2019 takes inspiration from the 2017 Witchy Methodologies conference at the ICA, curated by Anna Bunting-Branch, from the words of poet Holly Pester and books of philosopher Silvia Federici and from the Eavesdropping programme of Liquid Architecture.

Rooted in the ideas of Federici and Pester, Witchy Methodologies will explore rituals and reenchantment, doubling and transformation, gossip and eavesdropping, hauntologies and orreries, mysticism and technomancy, showing how these procedures – which seek to disrupt and queer the norms of learning and labour – are being used by artists working today.

LCMF 2019 will age you, haunt you, feed you gossip. We'll eavesdrop on onanists, play with mud, dance with ghosts, turn TVs into hearths. There will be bloodthirsty crows, (Soma)tic incantations, Soviet erotica and deep meditation. The dead will be divined, orchestras teased, dinosaurs consulted, spells will be cast, pianists hypnotised, audience entropy will be monitored, state murders exposed.