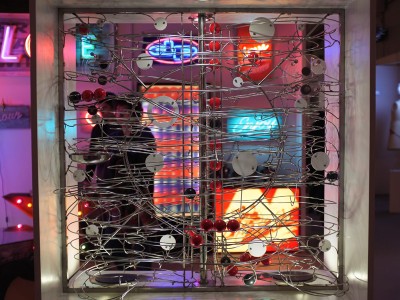 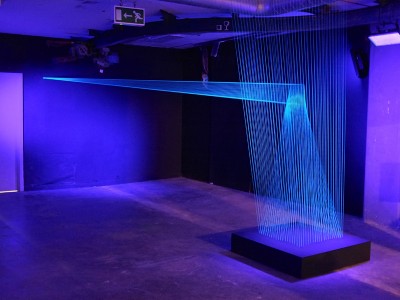 The Kinetica art fair provides an international platform for museums, collectors, curators and the public to view and buy Kinetic artworks. Alongside the fair the events programme entitled “Time, Transformation and Energy” focused on the shifting of time in the light of cosmological, astronomical, environmental and evolving universal events. It featured artist presentations, live performances, talks and screenings. 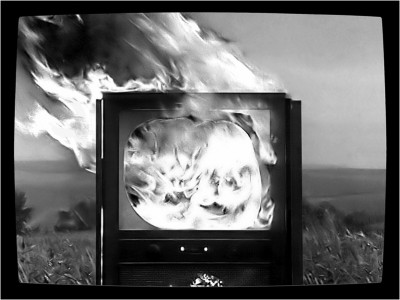 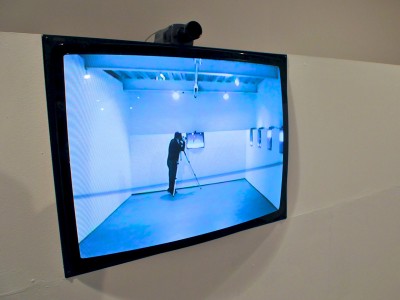 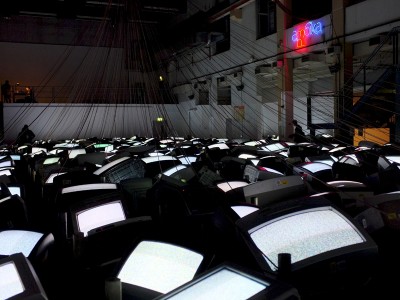 The dramatic contemporary reworking of one of Hall’s early major works ‘101 TV sets’ will form the centrepiece of the exhibition. '1001 TV Sets (End Piece)' will feature 1001 cathode ray tube TV sets, of all ages and conditions, filling the massive Ambika P3 subterranean space. The TVs will be tuned to different analogue stations playing randomly in a cacophony of electronic signals, gradually reducing between April 4 and April 18, as the final analogue signals are broadcast from London’s Crystal Palace. When transmission is turned off, the multiple sets will emit only terminal audio hiss and a visual sea of white noise.

Internationally recognised for his groundbreaking work in the field of video art, David Hall (b. 1937) has often been cited as its most influential pioneer in Britain. On 25 January 2012, he was awarded the augural Samsung Art+ Lifetime Achievement Award by an international panel.

Hall started his work as a sculptor and was awarded first prize for sculpture at the Biennale de Paris in 1965 and the following year he took part in the first major exhibition of Minimalist art, Primary Structures, New York (1966) before turning to photography, film and video. He participated in the formation of the Artist Placement Group with John Latham and others in 1966 and was co-organiser of the seminal international Video Show exhibition at the Serpentine Gallery, London in 1975; and co-curator of the first video installations exhibition at Tate in 1976. In the same year he initiated and was a founding member of the artists' organisation London Video Arts (now part of LUX).

David Hall’s first works for television appeared unannounced on Scottish TV in 1971. The transmissions were a surprise, a mystery, and have been acknowledged as the first artist interventions seen on British television. An installation version of these early ‘TV Interruptions’ will be exhibited in Ambika P3 alongside ‘Progressive Recession’ a multi-screen interactive work utilising 9 cameras and 9 monitors as complex analogical mirrors.

The exhibition is presented by Ambika P3, University of Westminster in association with Rewind and supported by DHL Envirosolutions, SWEEEP, North London Waste Authority and VINCI construction.

‘A single figure dominates the beginnings of video art in Britain - David Hall, and his early experiments with broadcast television are unique. Not only are many of his video pieces classics but he has made important and often brilliant contributions to experimental film, installation and sculpture.'

Hall introduced the term 'time-based media' through his writings in Studio International and elsewhere, and created the first time-based art degree option with an emphasis on video at Maidstone College of Art, Kent (now University for the Creative Arts) in 1972. He has made work for broadcast by, among others, BBC TV, Channel 4 TV, Scottish TV, Canal+ TV and MTV.

Source of Televisions for the Exhibition

“DHL’s environmental service offering Envirosolutions are proud to be sponsoring ‘1001 TV Sets’.  Through the project, Envirosolutions have organised the collection and safety testing of the TV’s.  TV’s have been coming in from across the London areas, including the 7 North London Waste Authority boroughs (NLWA). These have then been forwarded on to a specialist WEEE processer, SWEEEP where the TVs are sorted and tested. Support has also been given from Leicestershire County Council, who has collected a considerable number of TVs from their recycling centres in Leicestershire.  Leicestershire have recently gone through the digital switchover and are experiencing an increase in CRT’s than the usual activity at their recycling and reuse sites.”

To mark the exhibition, the Centre for Research and Education in Arts and Media (CREAM) of the University of Westminster is convening Exhibiting Video, a three-day event considering issues central to the display of video art, bringing together notable artists, curators and writers. 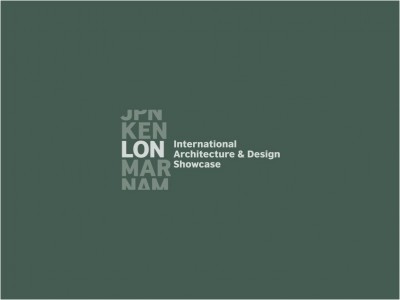 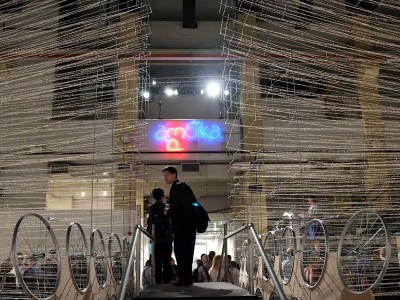 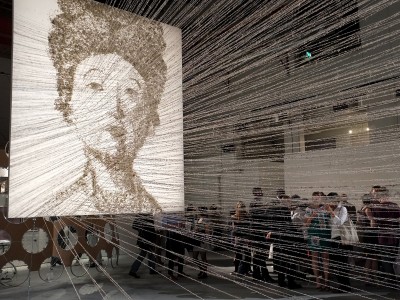 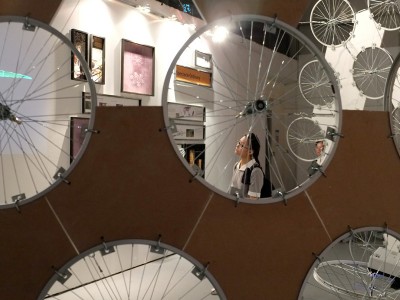 As one of the focal points for the Showcase, the cavernous space of Westminster University’s Ambika P3 gallery will be transformed into a series of unique zones exploring the architecture of five countries where change has been etched upon their architectures. In the heart of Westminster’s Marylebone campus, Taiwan, Namibia, Serbia, South Africa and the Caribbean will come together to present architecture, cities, structures and ideas that have all undergone radical shifts. A tensile structure of seed-lined cotton threads will span the main hall, designed by Taiwan’s National Cheng Kung University. The evolution of the city will be explored by Serbian architects in the ‘dialogue room’, alongside a filmic portrait of Johannesburg; an investigation into an ecological design revolution from the Chinese Culture University in Taipai; a critical understanding of the post-colonial Namibian city and a 3D look at the changing use of responsive natural materials in the Caribbean. The Hub Space will also be home to a series of talks, debates and lectures jointly organised between the University of Westminster and the British Council, on the theme of Design Diplomacy, to investigate how architecture and design can be a tool for diplomatic engagement.

www.designdiplomacy.blogspot.com for events and programme information. 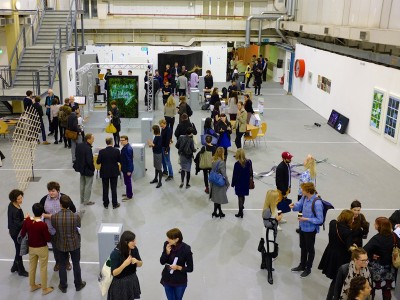 SUNDAY, the gallery–led art fair, is a platform for an intimate group of like-minded commercial galleries to present work by a diverse range of artists within a relaxed environment. The fair will return to London for its third edition from 11-14th October 2012 at Ambika P3, Marylebone Rd.

Showing a selection of 20 young international galleries, SUNDAY is recognised as an integral part of the London, UK and international cultural landscape. Housed in Ambika P3, a 14,000 square foot, triple height subterranean space, SUNDAY is free and open to all and last year welcomed over 6000 visitors.

Over ten new galleries will be making their SUNDAY debut this year and nearly half the galleries contributing to the 2012 edition have been established for 3 years or less, embodying SUNDAY’s aim to introduce fresh international talent to audiences.

The four day event creates an easy-going environment for each gallery to exhibit their artists’ work; it is a fair with no booths or divisions, allowing exhibitors to show solo or duo artist presentations that respond to the imposing space.

This edition will also include SUNDAY School, an extended public programme of projects and events by artists. cura., Elephant, ICA, Kaleidoscope and Mousse will feature in the publications section.

Already a must-see event, SUNDAY makes a valuable contribution to the most exciting cultural week in London and gives audiences the opportunity to discover new artists and galleries in an accessible and immediate way.

‘Artangel has pulled a rabbit out of the hat’ The Telegraph

‘You have to bow before any piece that manages without effort to be theatre, music and art installation all at once’ The Times

Five pianos hang motionless above steaming pools of water in a living, breathing subterranean world. As the light recedes, the pianos wake and begin to play themselves, advancing menacingly through fog and rain to the strange disembodied voices of William S Burroughs, Malcolm X and Claude Lévi-Strauss ...

First shown by Artangel in London in 2008, Stifter’s Dinge, a commission by German composer and director Heiner Goebbels, is an extraordinary combination of weather and nature, mechanical objects, projections and sounds. Inspired by the work of Adalbert Stifter, a 19thcentury Austrian writer, poet and painter, celebrated for his rich descriptions of natural landscapes, it is a composition for five pianos with no pianists; a performance without performers.

For two weeks only and for the last time, Stifter’s Dinge returns to its original home at Ambika P3, a former concrete testing facility underneath Marylebone Road. It will be presented in two versions; a revival of the 2008 seated performance and a new durational version,Stifter’s Dinge: The Unguided Tour, created especially for the space, where audiences will be free to fully explore the environment, experiencing the work up close and from multiple viewpoints as a continuously evolving installation.

Heiner Goebbels is one of the most important exponents of the contemporary music and theatre scene. His compositions for ensembles and big orchestras, including Max Black, Hashirigaki, Schwarz auf Weiss, Eislermaterial and I went to the house but did not enter are currently performed worldwide. Goebbels works as a professor at the Institute for Applied Theatre Studies of the Justus Liebig University in Giessen (Germany) and is President of the Theatre Academy Hessen. From 2012 to 2014 he is the artistic director of Ruhrtriennale - International Festival of the Arts.

Stifter’s Dinge was originally commissioned by Artangel and Théâtre Vidy-Lausanne in 2008, with support from the Goethe-Institut and in partnership with P3, University of Westminster. In 2012, Stifter’s Dinge: The Unguided Tour is co-commissioned by Artangel, co-produced by Ruhrtriennale – International Festival of the Arts, executive produced by Théâtre Vidy-Lausanne and presented in partnership with Ambika P3, University of Westminster. 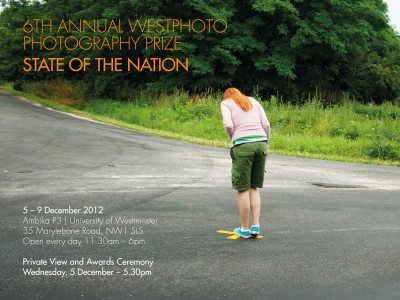 Winners of the University of Westminster’s 6th annual WESTPHOTO photography prize will be announced at a private viewing on Wednesday 5 December 2012 at the Ambika P3 Gallery, the University’s contemporary art and architecture space, in central London.
Now in its sixth year, this year WESTPHOTO invited students and alumni from the University of Ulster, Edinburgh Napier University and University of Wales Newport to take part in the competition. This year’s theme is titled ‘State of the Nation’ and it is focused on depicting the current state of affairs and explores the development and progression of our world.
Established in 2007, WESTPHOTO is a picture agency, library, and provider of a full range of professional photographic services which is run by students from the Photography Department at the University of Westminster, one of Europe’s leading schools of photography which offers a diverse and wide range of photographic courses at undergraduate and postgraduate level. The photography prize was set up in 2007 to celebrate the high quality of critical work produced by young and emerging photographic artists.
Acclaimed professionals from the British Journal of Photography, The Photographers Gallery and Simon Roberts, an internationally recognised British photographer, are among the judges who will be selecting three winners for the single image category and project work category. The judges will also choose twenty shortlisted photographers whose works will be exhibited in London, Belfast, Newport and Edinburgh. Apart from being exhibited, the winners will receive prizes sponsored by Manfrotto, Moo Cards, Bob Books, ONIMAGE and Epson.
The ‘State of the Nation’ winners will be announced at a private viewing on Wednesday 5 December 2012 from 6pm.
For further information please visit www.state-of-the-nation.co.uk and www.westphoto.co.uk/competition. 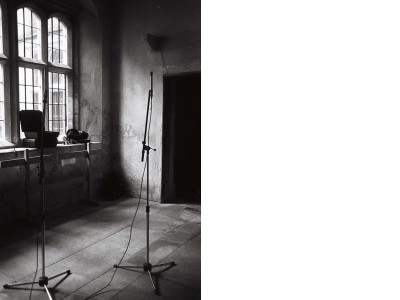 Emptyset, James Ginzburg and Paul Purgas's experimental electronic music project, extend Sounding Space's exploration of the resonant ways in which architecture can both shape and be captured by sound. In a method developed through their acclaimed album Medium (Subtext, 2012) Emptyset will create a unique sonic portrait of architectural space, translating and recording the space's acoustic response to the frequencies they will push through it, to create an original composition and site-specific sound installation for one night only.
Emptyset will tackle the cavernous Ambika P3 for the AF Sounding Space commission. P3's 14,000 square foot, triple height subterranean space – a former concrete construction hall where components of Britain's motorways and the Channel Tunnel were tested – will be amplified by microphones and subjected to sine waves and noise, to create a unique sonic portrait of the space imprinted with the characteristic qualities of its architecture.
Using an array of speakers and microphones the project will examine sonic translations of space whilst simultaneously exploring the dialogue between an individual structure and its invisible interactions with the ambient sound of the city. The piece will document the specifics of P3's architecture by recording and interacting with the specifics of its acoustics, and transforming the buildings’ walls into audio receivers for the sounds of the city outside.